Exodus 31:3-5:  “I have filled him with God’s Spirit, with wisdom, understanding, and ability in every craft to design artistic works in gold, silver, and bronze, to cut gemstones for mounting, and to carve wood for work in every craft.” (Holman Christian Standard Bible)

The Spirit of God and workmanship.  Workmanship and “artistic works” reflecting the Spirit of Wisdom.  The God of the universe, the creator of you and me, the One who walks beside us and lives within us, is the very source of all artistic inspiration.   As an aspect of reflecting His glory, we can impact the world around us by planting artistic seeds of transformation, blessing, and heavenly insight into the souls of others — seeds which the Holy Spirit can use to bring transformation.

In the book Born to Create, author Theresa Dedmon writes, Heaven’s sounds, colors, movement, and creativity, all in worship to the King of kings.  It’s time for all the arts to bring glory to God as we learn to sing the songs of Heaven, dance our love for Him, and paint anointed visions in His presence!…I am amazed at how life-changing creativity can be when people are taught to create with the Holy Spirit…God is raising us up in a divine partnership…”

(Below, right:  Title, Worship Exploding.  Like a rare perfume that has been pressurized, the top pops off and a glorious scent of Him and His Presence is released)

Collaborative Creativity:  Jill Carattini of RZIM (Ravi Zacharias International Ministries) posts this short article on the positive impact of “communal creativity.”  She notes, “The early church began to see the role and presence of the Spirit in God’s creative work…we are creatures and co-creators alike…”

The ability to plant a seed or open an artistic/visual doorway for the Holy Spirit to communicate Spirit-to-spirit is at the heart of much prophetic art.  Some visual art depicts actual scenes of spiritual realities or topics — such as the God-touching-Man scene painted on the ceiling of the Sistine Chapel, or artistic renditions of spiritual warfare taking place in the unseen realm.

Prophetic art incorporating a Word of Knowledge is often of a more personal nature.  In these situations, unction from the Spirit has more impact than the quality of the artwork itself.   In this scenario, even stick figures depicting a “message” can be quite effective.

Recommended:  if you are on FB, check out Theresa Dedmon, Creative Community and submit to join the group.

Recommended:  Again, a FB page.  Sanctuary Arts from The Sanctuary Church keeps new prophetic artwork updated on this site, as well as announcing the happenings in its creative group.

The Sanctuary Church hosted a women’s day of ministry, inner healing and intimate time with Jesus on Sept. 12.  Women were treated to a henna tattoo “space” with single-word encouragements such as “beloved,” “bold,” “visionary,” etc., a resting space for prayer and foot-soaking, spaces for teaching, personal prayer, and others, and my area, Snapshots and Scriptures.

In this prophetic-photos venue, each photo had a scripture on the backside.  Women entered the room, were encouraged to ask the Lord which picture He had put aside for them, or which photo “drew them.”  With photo in hand, they could then read the scripture printed on the back. 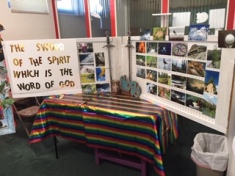 It was so exciting to hear testimonies of how the Spirit confirmed a specific theme throughout several resting spaces, or game them direct encouragement through the scripture. 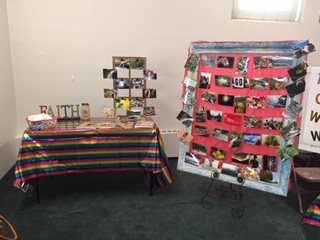 August 14, 2019:  Lead Singer of Rock Band Skillet Calls for Return to “Preeminence of the Word”

I’ll admit it up front:  I have never heard of Skillet, though that is a reflection of my listening preferences rather than the group’s music.  I was quite impressed with lead singer John L. Cooper’s comments, as reported by theblaze.com, as he discusses two recent public Christian figures “renouncing/losing” their faith (Joshua Harris and Marty Sampson).  According to the article, Cooper pointed out, “We are in a dangerous place when the church is looking to 20-year-old worship singers as our source of truth…it is time for the church to rediscover the preeminence of the Word.  We need to value truth over feeling…let us not find creative ways to shape Gods Word into the image of our culture by stifling inconvenient truths…”  Kudos, Mr. Cooper!  An article worth reading.

I love one of the quotes used in this article shared by theblaze.com:  “We have to be intentional about just sitting down with God.”  Kelly is also quoted as comparing spiritual discipline to physical discipline:  “‘It’s like working out.'”   A quick, fun read from someone sharing a bright witness among music-lovers.

Already Feb. 10??  I am feeling way behind…but remembering I was sick for most of January has helped me mentally excuse my slow-poke progress….

I photographed this wall of prophetic art towards the end of January, though I think the display started a little earlier.  Each piece of art represented a different “role” or persona that Jesus fills.  Very impressive display with multiple artists participating.

Lori V. worked on this fun piece (below) the same Sunday Pastor Eric taught on Psalm 23, so it was both charming and fitting — this particular lamb has the whole world as its body!  Look closely and you will see the world! 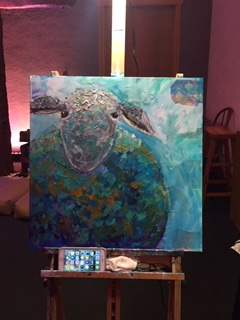 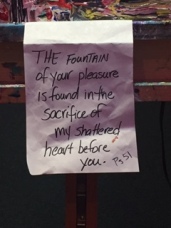 With the artwork-in-progress aligning with the teaching on Psalm 51:

I was given this “Hope” sign during a Christmas gift exchange and didn’t really have a place for it.  Then I thought about the fireplace hearth, since I had taken down Christmas decor and had a large space.  To brighten up the corner, I added red flower lights and bam! it took on a persona of its own:  Hope, Blooming!   What a lovely prophetic encouragement to start 2019!  The concept of sharing “hope blooming” with others appeals to me so much I intend to work it into a marketable photo using real flowers, later in the year. 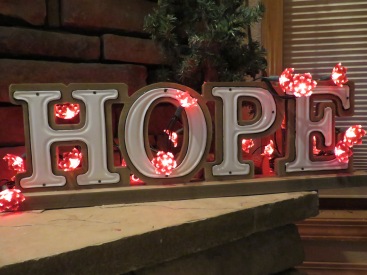 Wow, I can’t believe I’ve hit the three-month mark for “not posting” on this page, as it represents one of my favorite subjects.  I suppose my creative energies have gone into re-creating this website and putting together the Inner Creek FB page….So here I am, back again and looking for Kingdom creativity!  Here are a couple of creations already hanging/under progress at The Sanctuary Church in Old Colorado City.

Artist Lori Vafiades was working on this painting last Sunday morning.  Lori said that the correct way to interpret her paintings was to think of them “as love letters from God.”  As to the content of this painting, she pointed out there were three bees, and threes were always a reminder of Father, Son and Holy Spirit.  God is very busy doing things in peoples’ hearts.

This recent painting/collage depicting the beauty of fall foliage shares a significant message.

How important is a smile, a handshake, hugs or a “bless your evening”?  The answers to that will vary significantly.  But I can’t help it — I just love welcoming folks and blessing their evening or day.   Although not yet settled in a church home, I donned headband rabbit ears and welcomed the folks who came to Movie #2  with Movie Above the Clouds, “Peter Rabbit.”  (Hence the wearing of bunny ears.)  Radiant Church in WP is currently coordinating and co-sponsoring MOVIE.  Radiant worship leader Dustin Guthrie helps with the more difficult work of setting up and taking down, and serving as emcee/announcer.  One more movie to go….too bad they don’t offer any “Movie Under the Snow” nights in the winter….should I suggest it?

I am delighted to see a follow-up to the April 9 article cited below.  According to theblaze.com, “The 46-year-old Snoop Dogg performed several of his older hit songs before launching into a gospel production” at the recent BET (Black Entertainment Television network) award ceremony.  He performed the new song “Sunrise” in conjunction with Tye Tribbett, who is both a gospel singer and pastor.

According to christiannewswire.com, Dr. Dean Bertram of godcountryfamily.net is accepting submissions from filmmakers whose movies “celebrate the ideals and relationships that are the foundations of a healthy, patriotic and Christian society.”  This will include themes Bertram describes as “those stories, morals and beliefs that are ignored or even mocked by today’s popular culture.”  Hosted by Chippewa Falls, Wisconsin, the film festival will be held Dec. 7-9 and is planning to grow in size and influence over the years ahead.  To view its website, click here.

Christianheadlines.com shares that Actor/producer Will Smith recently sent an Instagram “to communicate with his 15 million followers about the nature of fear and how God often allows us to experience fear before we see the light at the end of the tunnel.”  Using a skydiving analogy, Smith discusses fear and the good things of God.  A quick, fun read.

This is such a fun posting from Theresa.  She writes, “As people experienced our event, they were surprised at the way we were honoring people, and having so much fun doing it.  It wasn’t long before they were also sucked into our culture of celebration, and many had amazing God encounters, as we honored them, and expressed God’s love to them through our creative expressions.”  Theresa’s team put up portraits of local folks in a celebration entitled “The Faces of Redding,” then lined them up in a central hang-out area of Redding.  The subjects of the portraits, “unsung heroes in Redding” were then the recipients of their portraits.  Is this an awesome example, or what?

If Papa God is out to overwhelm a specific religion-suspicious segment of the population right now, Snoop Dogg is a great vehicle to utilize!  Having previously declared himself a follower of Islam (2009) and a Rastafarian (a Jamaican religious movement) in 2012, Snoop is currently defensive when talking about his born again spirituality, accusing others of not accepting him in love — but, instead, with judgment.  His move towards Christianity apparently gained traction around 2015-2016.  He dressed in ecclesiastical garb for this year’s 33rd Stellar Gospel Music Awards on March 30, singing a number from his recent Bible of Love album.  This is one I want to watch — if Snoop is moving and growing in a sincere turn to Christ, whole populations of in-the-shadows people could experience an incredible revival.  Lift up Snoop Dogg as a prayer subject!

Dr. Jerry Newcombe of Truth in Action Ministries shares this interesting article on faith-based movies “exploding” in Hollywood, resulting in “changing lives.”  Radio host/producer/actor David A. R. White stated in an interview, “Faith is not dead in the United States.  I think that hunger is there for spiritual content.  People want answers.  They want to learn about their faith, and they want to be entertained, of course, because it’s in a movie theater.  But at the same token, they’re yearning for that spiritual content.”